Our first day in Israel is quickly coming to a close. It is so good being back in "The Land." Life is always interesting here. Our fun began even as we left the airport and if our taxi driver hadn't been driving at the speed of sound we would have a picture to show you. We passed a guy on a small motorcycle buzzing up the hill to Jerusalem. We surmised it was a new motorcycle because his license plate was on a chain draped around his neck with the license plate dangling on his back instead of being attached anywhere on the motorcycle. We all thought that was quite creative but maybe illegal.

As we approached Jerusalem our taxi driver asked us if we needed to go to the east side of the city. He was not willing to drive to that area because of the outbreaks of terror going on. That was a first for us. He kindly told us he would get another driver to take us there if we wanted to go to that side of town. We assured him we were going to west Jerusalem. As we walked around today we have seen lots of police and soldiers patrolling the area.

We spent the day walking, buying and people watching.  While we were walking on Ben Yehuda Street we passed a large group of young men dancing, waving flags and singing patriotic songs to help build the morale of stressed Israelis. As I mentioned earlier we enjoyed our time in the shuk. It's hard to call a halt to the buying when all the food looks so good. Our first stop was to get freshly squeezed pomegranate juice.  We came back to the apartment with our arms stretched, loaded with bags of food. 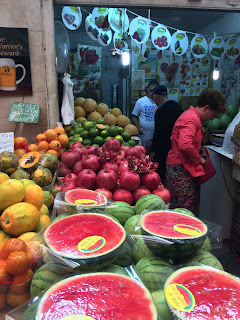 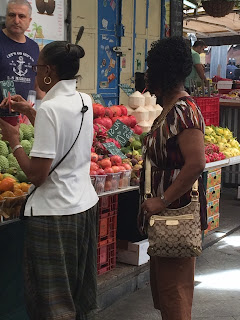 We have worked hard to keep our eyes open all day and not give in to afternoon naps. Hopefully the jet lag will be over soon and we will be sleeping through the night.  We look forward to tomorrow and another day in Jerusalem!

Thank you for the update and the pictures. Praying for a continued safe and successful trip..Irv

Newer Post Older Post Home
Subscribe to: Post Comments (Atom)
Follow along as we experience the Land of Israel and her people through the eyes of first time visitors and veterans. Our main purpose is to bless the Jewish people of the Land.